Mr Triple R Everything You Need to Know in 2022

In the world of gaming in Bangladesh, Mr Triple R is one of the most popular names. Most people know about him from the video-sharing platform Youtube. He is one of the most popular gaming content creators from Bangladesh. Most people know only his voice only. No one knows his face and other information. Today we will talk about him in detail. So, let’s start.

Who is Mr. Triple R?

The gaming content creator who is popular as Mr. Triple R has an identity but most of us don’t know. The word Triple R means 3 R (RRR). This actually refers to his name. The name of this gaming video creator is Rejaur Rahman Resvy. This person never came in front of the camera. That is why no one knows his face. Even he never shares his on any platforms.

So, we only know about his voice and gameplay videos. Nothing is known about him. This is his personal identity. One more thing you need to know about Mr. Triple R. That is his Youtube channel. The Youtube channel called Mr. Triple R is owned by Rejaur Rahman Resvy.  This channel has almost 4 million subscribers.

The earning of Mr. Triple R is huge and has many sides to earning. His earning sides are like Youtube Monetization, Sponsorship, Facebook page monetization   But we don’t know about the earning of this content creator from all sides. We only can guise his earning from the Youtube channel. Let’s see what is the monthly earning Mr. Triple R.

According to social media statistics and analytics platform Social Blade, The monthly earning of Mr. Triple R is around 10,000,00 BDT to 12,000,00 BDT. Though this is not 100% correct. But the possibility of being true is very high. 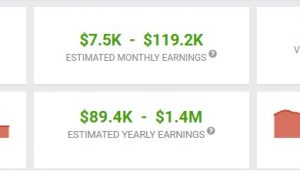 Mr. Triple R has Free Fire Diamond selling business. If you ask any question on their business Facebook page then they will offer you these diamonds. That is another source of earning for Mr. Triple R. He earns a huge amount from there. But the amount can not be guise.

This is very easy to get if you go to his youtube channel. But if you don’t know how to find these then you may visit the link given below. This will take you to the latest videos of Mr. Triple R YouTube Videos.

Diamond selling is one most revenue-generating sides of Mr. Triple R.They sell their diamonds from their official Facebook page. They have different packages of top-up offers. If you want to buy from them then you may try.

The offers below will require Free Fire User Id only.

They have weekly and monthly packages also for the best price. You may try them.

Free Fire id is an identity for the Free Fire users. This id bears very much significance for the players of this game. As we are knowing about the famous Free Fire gamer Mr. Triple R, you may want to know his free fire id. Here I arrange the free fire id of this popular gamer 728027523.

Ans: Mr. Triple R never came in front of the camera. So, no one knows his identity. There is some fake information about his face on the internet.

Ans: The real name of Mr. Triple R is Rejaur Rahman Resvy. All three Rs from his name are called triple R.

Ans: There is no photo available of Mr. Triple R. Because he never uploaded his photos on the internet. As a symbol, he uses a rabbit face Free Fire character’s image. This is his identity on the internet.

Ans: The personal phone number of this YouTuber is not available. But if you feel you need him for any reason. Then you may mail him directly. The mail address of Mr. Triple R is rj.resvy.rr@gmail.com

Ans: The Free Fire name of Mr. Triple R is mrtripler. This is the present name. The name may change any other time. His Free Fire id is 728027523.

Ans: To get new videos of Mr. Triple R, you have to go to his Youtube channel. There you will find an option called “video”. You have to click there to get the video.

At the end of this discussion, I want to give you my instruction. Always be aware of fake IDs and social accounts of celebrities like Mr. Triple R. As he sells diamonds of Free Fire game then you need to be sure about the official social accounts. That was all about the gaming content creator Mr. Triple R. I hope you get all you wanted. Thanks for reading.

Added to wishlistRemoved from wishlist 7